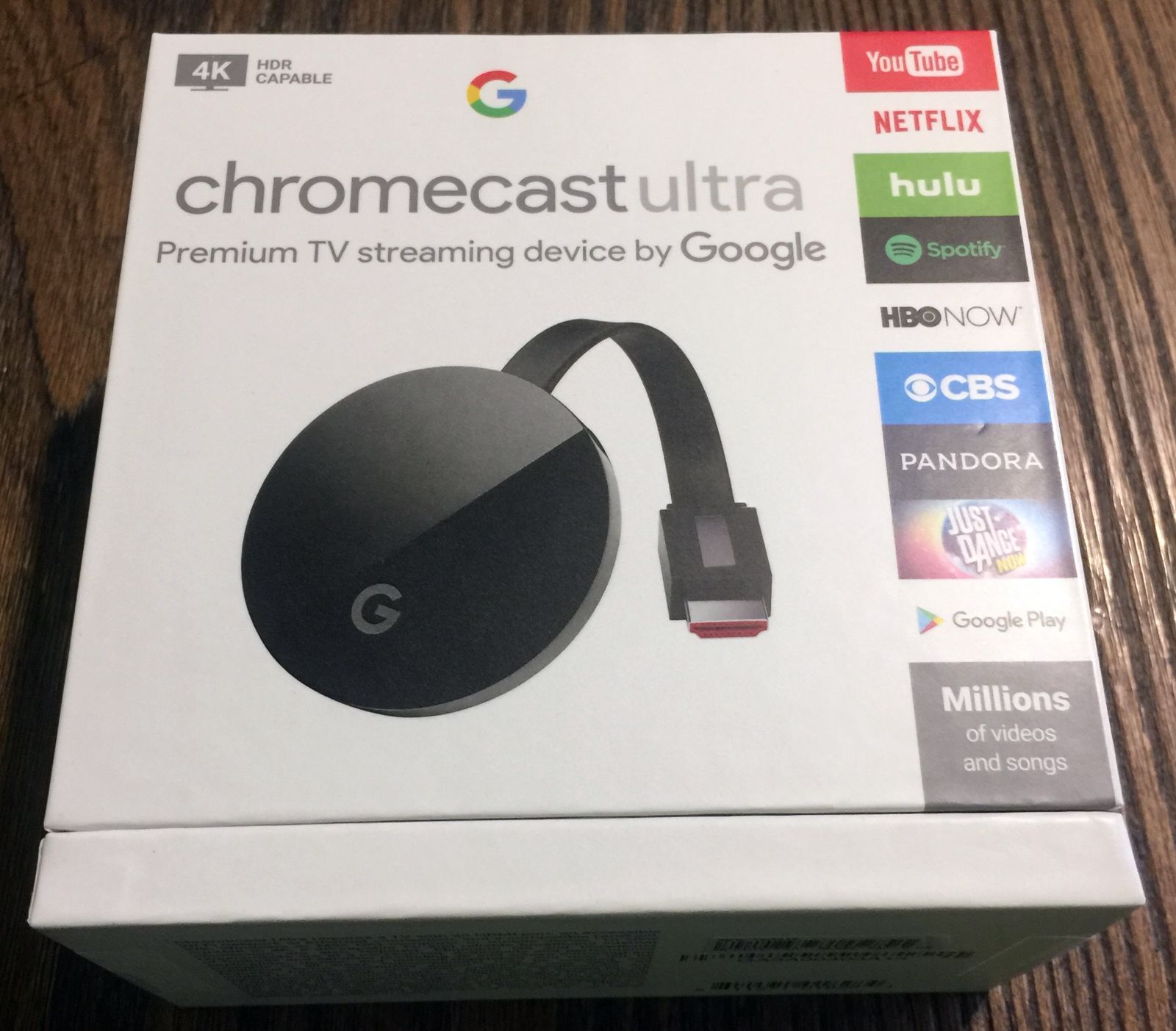 Item Details: Brand: Google Media Input Connectivity: Ethernet, Wi-Fi, HDMI Model: Google Chromecast Ultra Manufacturer Color: Black Media Streaming: Home Network Media Max. Resolution: 4320p Audio/Video Outputs: HDMI MPN: GA3A00403A14 Color: Black UPC: 0811571018284 About this product Product Information With the advances in technology, there are many powerful devices that come in small packages. One such device is the Google Chromecast Ultra Media Streamer in black. The Google Chromecast is a media streaming device that connects to HDR and 4K Ultra HD television through its HDMI port and makes it possible to watch movies, TV shows and other programming from streaming services like Hulu, Netflix, and Vudu as well as individual networks like CBS and NBC. All it takes is an Internet-enabled iOS or Android device, laptop or desktop computer that uses Mac or Windows operating systems or a smart TV. It uses connections like Ethernet, microUSB, and HDMI. It is also possible to use your TV as a complete media center because the Google Chromecast Ultra Media Streamer also gives you access to music stations, video gaming sites and much more. By working with HDR and 4K Ultra HD television, the picture quality provided for the programming from the Google Chromecast Ultra Media Streamer is stunning to look at. The device also provides smooth streaming with little to no buffering. It also eliminates the need for a separate remote because the smartphone, tablet or other device that is supplying the Internet access is also the remote control. It is able to mirror what is on any device and mirror any website, such as social media apps, news website, sports information websites and music sites. For those who also have a Google Home device, you don’t even need to use a device to control the content coming from the Google Chromecast Ultra Media Streamer as you can simply issue voice commands to your Google Home device and the streaming device responds in kind. Product Identifiers Brand Google MPN GA3A00403A14 GTIN 0811571018284 UPC 0811571018284 Model Google Chromecast Ultra eBay Product ID (ePID) 229549053 Product Key Features Media Streaming Home Network Media Audio/Video Outputs HDMI Color Black Media Input Connectivity Ethernet, Wi-Fi, HDMI Manufacturer Color Black Max. Resolution 4320p Dimensions Weight 0.1lbs. Width 0.54in. Height 2.3in. Depth 2.3in. Additional Product Features Model Number Chromecast Ultra Type Digital Media Streamer

A streaming media device offers you plenty of hours of viewing enjoyment. With so many devices offered it could be tough to pick which player is best for your demands.

1080p is the standard resolution for a lot of players as well as TVs. For greater resolution 4K designs are becoming more typical and use a much better image. A 4K television or screen is needed for this resolution.

The latest media devices make use of quad core processors which enable much better streaming performance.

A sufficient amount of memory is vital when it comes to streaming. Having enough memory will create a far better experience. Seek at least 2 GB of memory or more.

Having good wireless connectivity enables you to set the media device further away your router and also still have a good connection.

Several devices feature popular apps. Some come with games too. Examine the summary meticulously to guarantee that the applications you want to use come installed on the player.

Many devices come with a remote. Some consist of a wireless keyboard kind or a voice controlled remote. Numerous also included or allow for quickly installed hard drive storage space. The summaries shown on this website can help you determine which streaming media player will fit your demands and budget. Use them to contrast the functions of the most current players.